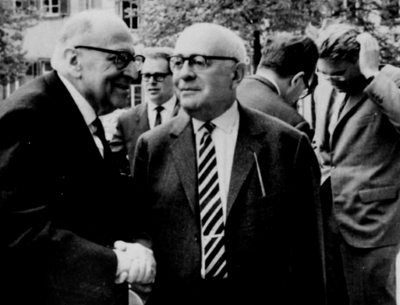 In the recent issue of the New York Review of Books, Professor Samuel Freeman examines three books that consider the lives and legacies of the influential members of the Neo-Marxist Frankfurt School for Social Research. From the article:

Marx’s account of ideology or “false consciousness” is his most enduring legacy in the West. It provides the intellectual foundations for the work of the Marxists who founded the Frankfurt School in the 1920s and continued developing it until the 1970s. They provided the basis for what is called “critical theory,” which, drawing on Marxist and Freudian ideas, emphasizes the underlying, often hidden forces that determine the shape of culture. The three books reviewed here survey the lives and ideas of the most famous members of the Frankfurt School.

The books reviewed include:

Grand Hotel Abyss: The Lives of the Frankfurt School

by Stuart Jeffries, Habermas: A Biography

by Stefan Müller-Doohm, translated from the German by Daniel Steuer, and Adorno and Existence

The full article can be read here.