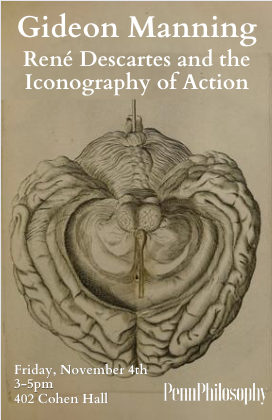 Please join us on Friday, November 4th for our next Philosophy Department Colloquium with Professor Gideon Manning. The event will start at 3pm in room 402 of Cohen Hall, with a reception to follow.

Title: René Descartes and the Iconography of Action

Abstract: René Descartes was a gifted writer willing to experiment in genres and styles, including the dialogue, essay, meditation, textbook, broadsheet, and monograph. Philosophers often take it as given that Descartes exercised complete control over his work, but this is hardly the case. In several of his publications, specifically his natural philosophical essays, textbook and monographs, Descartes incorporated images—many images—all of which required reliance on artists and complex production techniques not always within his control. Indeed, significant challenges confront us when grappling with Descartes’s visual legacy, not least because he had little to do with some of the most famous images associated with his work, especially those appearing in the Latin and French editions of the Treatise on Man. In this talk, I will discuss how Descartes’s texts and images work together to focus our attention on local motion and the forces of nature, both key features of his metaphysics of the natural world. I will argue that Descartes develops a distinctive iconography of action, the coherence of which relies, at least in part, on the early modern anatomical tradition’s threefold distinction among historia, actio, and usus, which itself derives from Galen of Pergamon. If my argument is correct, there are three significant lessons to be learned. First, Descartes’s intellectual debts to medicine should prompt more expansive study of the medical tradition by historians of philosophy. Second, there is a lesson about functional analysis and the unity of living things, which find distinctive and uniquely sophisticated expression in the anatomical tradition. And finally, there is a lesson about the proper role of what we would now call “models” and visualization in early modern scientific inquiry, which Descartes exploits to good effect.