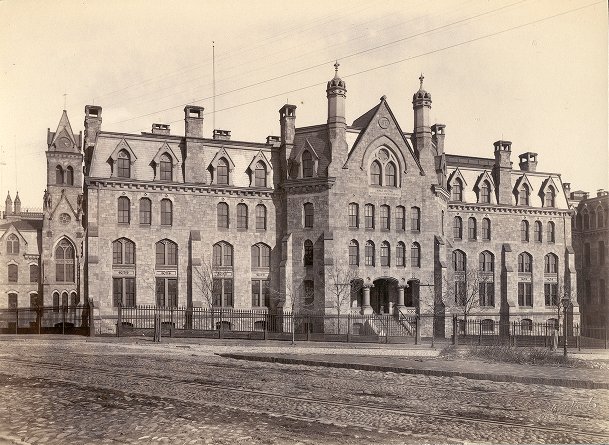 Philosophy has been taught continuously in the University of Pennsylvania and its predecessors since 1755, when the bachelor of arts degree was first offered. The first teacher of philosophy was William Smith, first Provost of the newly founded Academy of Philadelphia. The various branches of philosophy, which included logic, metaphysics, moral philosophy, and natural philosophy, formed the core of the College curriculum. A professor of Ethics was named in 1755, a joint appointment in Classics and Metaphysics was made in 1756, and the first professor of Natural Philosophy was named in 1762. Throughout the nineteenth century there was a professor of Moral Philosophy, who was typically a clergyman and often the Provost (chief academic officer) of the University. The professor of Natural Philosophy was a chemist or physicist. The arts faculty in general was known as the faculty in philosophy.

During the nineteenth century the chair in philosophy came to be called "Intellectual and Moral Philosophy," to indicate that it covered more than ethics and theology. The first instruction in psychology at the University was given by a philosophy professor, George S. Fullerton. Fullerton was appointed as the first Adam Seybert Professor in Moral and Intellectual Philosophy in 1883, a position he held until 1904. The Professorship is named for Adam Seybert, Penn M.D. (1793), member of the faculty, and subsequently congressman from Philadelphia. In accordance with the wishes of Henry Seybert (Adam's son, who funded the Chair), his duties required that he take part in an investigation of the grounds for belief in a spirit world. The Seybert Commission met from 1883 to 1887, and was in correspondence with William James, who was later Vice President and President of the American Society for Psychical Research in Boston. Its report in 1887 failed to find any positive evidence for a spirit world, and subsequent holders of the Chair were released from further investigation of spiritualism.

When the graduate faculty of the University was formed in 1882, it was known (until 1907) as the Department of Philosophy (listed here as in 1903). The first (non-medical) Ph.D. was granted in 1889, in physics. The first Ph.D. in philosophy was conferred in 1890 on Robert Shallcross De Bow for a dissertation on "The Idealism of Berkeley." The second was granted to William Romaine Newbold in 1891, for "A Prolegomena to a Theory of Belief." Newbold subsequently was appointed to the faculty, as was E. A. Singer (Ph.D. 1894, "On the Composite Nature of Consciousness"). Early dissertation topics pertained to the history of philosophy (ancient and early modern), ethics, metaphysics and epistemology, and psychology. (See complete list of dissertations, ordered by date--click on "submit" when the page comes up.)

In the early twentieth century, the Philosophy Department consisted essentially of Newbold, Singer, and Isaac Husik (Penn Ph.D. 1906), all trained by Fullerton. (Singer also had two years at Harvard as James' assistant.) Newbold, who was also Dean of the Graduate Faculty, began as a classicist and was known as a specialist in the history of ancient philosophy; but he also worked on the theory of belief, hypnotism, and spiritualism. He published little. E. A. Singer, by contrast, was a philosopher of science with an historical bent, who published widely on many different aspects of philosophy. His special field was described as "methodology and theory of evidence"; he regularly taught a course entitled "Philosophy of Science" from 1896-97, and one entitled "Development of Scientific Thought" from 1898-99. His books included Mind as Behavior, In Search of a Way of Life, and Experience and Reflection. Husik was a distinguished historical scholar, who made an important contribution to Aristotelian scholarship and composed a classic History of Medieval Jewish Philosophy (1916; bibliography updated by Harry Wolfson in 1941); he also taught jurisprudence and social philosphy. Newbold was Seybert Professor from 1907-26, and Singer from 1929-44.

In 1940 the department had a faculty of nine, including Glenn Morrow, who came from Illinois in 1939 as a Professor (and was Seybert Professor, 1947-65). Morrow initially worked on Adam Smith, and continued to publish in political philosophy. He is best known as a scholar of ancient philosophy, and for his book on Plato's Laws, entitled Plato's Cretan City (1960). Nelson Goodman joined the department in 1945, where he remained for twenty years, publishing The Structure of Appearance (1951), Fact, Fiction & Forecast (1954). Other notable figures included Elizabeth Flower (ethics and philosophy in America), the first woman to receive a tenured appointment in the department, Francis Clarke (medieval philosophy), Marvin Farber (phenomenology), Richard Martin (logic and philosophy of language), Paul Ziff (aesthetics and semantics), and William Fontaine (social philosophy), the first African-American to be tenured in the department.

James Ross joined the department as Assistant Professor in 1962 (moving from the same rank at Michigan) and was promoted to tenure in 1965. Charles Kahn was recruited from Columbia and appointed with tenure in 1965. Farber, Goodman, and Ziff left in 1964, Morrow retired in 1965, Clarke in 1966, and Fontaine died in 1968. Richard Jeffrey and Jim Cornman were appointed in 1967, and Zoltan Domotor in 1968. Jeffrey left for Princeton in 1974, and Cornman was killed in an automobile accident in 1978. Peter Geach and Elizabeth Anscombe were Adjunct Professors from 1968 to 1980; Mihailo Markovic was a frequent Visiting Professor from 1972-80, and Adjunct Professor from 1981-93. Michael Friedman joined the faculty as Assistant Professor in 1975, was promoted to tenure in 1978, and moved to the University of Illinois--Chicago in 1982. Scott Weinstein joined the faculty in 1976 and was tenured in 1982. Thomas Ricketts was appointed Assistant Professor in 1979.

The department has always combined work in core areas of philosophy, including history of philosophy, metaphysics, philosophy of science, philosophy of mind, and social and political philosophy, with an outward looking attitude that engages other disciplines. This aspect of the department is formally recognized in the Graduate Rules, which permit course work outside the department when academically appropriate. Members of the department have long participated in the cognitive science program, and were involved in the formation of the Institute for Research in Cognitive Science. Departmental members enjoy appointment in or cooperative relationships with a number of other schools, departments, and graduate groups, including Classical Studies, Comparative Literature, Computer and Information Science, German, the Graduate School of Education, History of Art, History and Sociology of Science, Mathematics, Psychology, Religious Studies, the School of Medicine, and the Wharton School of Business. Beginning in 1994, the department entered an agreement with the Law School to institute a JD/PhD program for study in Law and Philosophy; graduates of this program who have entered academic careers include John Oberdiek (Rutgers) and Paul Litton (NIH). Members of the Law School hold secondary appointments in the philosophy department; their number presently includes Anita Allen-Castellitto, William Ewald, Claire Finkelstein, and Stephen Perry (Heidi Hurd and Michael Moore held such appointments 1989-2000). Other faculty holding secondary appointments in philosophy from other Schools are Art Caplan (Medicine) and Tom Donaldson (Wharton).

Beyond the JD/PhD program, other recent doctoral candidates have shared this outward looking perspective by participating in the MD/PhD program, combining philosophy of science with formal study of medicine (Claire Pouncey, Peter Schwartz), or by taking significant work in a science, at Penn or elsewhere (Anya Plutynsky, Larry Shapiro, Alison Simmons). The department has more generally attracted PhD students in a wide variety of areas and has succeeded well at placing them.

The Philosophy Department has participated in the undergraduate major in cognitive science (COGS) from its inception in the 1980s. In the 1990s and early 2000s, members of the department played key roles in initiating several new interdisciplinary undergraduate majors. The first of these, which has the largest enrollment, is the PPE program (Philosophy, Politics, and Economics). The others are Visual Studies (VLST) and Logic, Information, and Computation (LGIC).

In 1967 the department moved into new quarters on the Third Floor of Logan Hall, having previously been divided between College and Bennett Halls. These facilities included a seminar room, common room, lecture room, a large room for graduate carrels, and an ample Philosophy Library. Due to deterioration of the building (resulting from a leaky roof), Logan was closed for renovation in 1991, and the department operated in "exile" from 3440 Market Street. In December, 1997, the department moved back to Logan Hall, now to the fourth floor. The Library was reinstalled in a room with skylights, a computer room for graduate students was located off the Library, four graduate student offices and two rooms for TF office hours were set aside, and a comfortable lecture hall was located on the floor, along with a small seminar room and a lounge with a view of Center City. Since that time, the computer room has been replaced by a common graduate computer lab on the second floor of Logan Hall, and computers for graduate students have been located in rooms reserved for TF office hours and graduate student study.